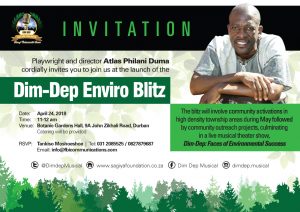 Please find a media invite for the launch of the Dim-Dep Enviro Blitz, an initiative with eThekwini Municipality and Invotech. Many of you will remember the Dim-Dep Musical, Faces of Environmental Success which is part of the blitz. Join us for a media launch on April 24, 2018 at Botanic Gardens. Please RSVP for catering purposes. Details below.

April 16, 2018, Durban, South Africa: Members of the media are invited to the launch of the Dim-Dep Enviro Blitz, boasting the famous Dim-Dep Musical: Faces of Environmental Success, as well as other activities with casts and music legends mixing with audiences in townships and shopping centers.

Back by public demand, popular musician and theatre producer, Atlas Philani Duma, brings back his revitalized and re-energized 2015 show, Dim-Dep Faces of Environmental Success which is part of Dim-Dep Enviro Blitz under the umbrella of the Sagiya Foundation. The main sponsors are Invotech and Ethekwini Municipality.

Presently, the cast are in rehearsals and the show will debut in June 2018. However, before that the cast and crew are taking their production on a whirlwind tour for the next two months throughout KwaZulu-Natal where they, alongside side city officials, promote environmental awareness.

Duma said: “This is an exciting project for the cast. We will spread our message beyond the stage. Members of the public will be able to see us first hand interacting with them, spreading the mantra and our theme: One Life. One Earth.

“What we provide with Dim-Dep is to use social cohesion to bring back people’s conscience about individual and community ownership of preserving our natural resources.

Dim-Dep Musical: Faces of Environmental Success tells the story from ancient times before urbanisation, industrialisation, and how the environment is affected. The full-length theatre production is just over an hour, with lively music, and explosive commentary.

The play will feature bright costumes and vivid sets to enhance the elements already presented in the story, all of which will be put together by beating drums and jazzy songs and music.

Duma continued: “The show is a representation of life on stage, a presentation of societal living in micro form, on stage. Our appeal goes beyond the youth but it also targets adults using drama as an extensive informant, a vibrant entertainer and profound educator.”

Through this production, Duma touches upon universal themes including right versus wrong, and environmental awareness. “We wanted to show that our actions on this earth have consequences. We go beyond the show in our community activations where we educate and make people aware,” said Duma.

“If children are inculcated with environmental consciousness early enough, the possibility of environmental awareness and the urge to maintain environmental responsibility could be higher than it is. After the show, we continue in our unique way to spread the message of saving the environment.”

Most of the actors are involved with other mainstream and community projects and at every instance have made the clarion call about preserving the environment.

As an edutainment project, the Dim-Dep Enviro Blitz is unique in South Africa and is a refreshing production encouraging us to pull together for “One Life. One Earth”, says music legend Xolisa Dlamini

“Through this production we aim not only to create awareness about the environment but also highlight the importance of keeping indigenous music alive.

The production is a dual themed production that carries it first theme through conveying messages of conservation of natural resources, while the second theme is the musical history that transforms to international music and cultural revolution.

It also allows young talent to be showcased and offering employment opportunities in the arts field.

Members of the media are invited to the launch of the Dim-Dep Enviro Blitz.

Snacks will be served.

Sagiya Foundation is a performing arts, theatre and musical enterprise production which focuses on delivering a total theatre production and musical enterprise solution to targeted markets. The indoor and outdoor initiatives are Afro-centric and aligned to education and awareness-raising. Sagiya encourages both individual and community development through creative projects that focus on environmentalism and culture, while creating jobs through the projects themselves.

For media queries and requests for interviews, please contact: